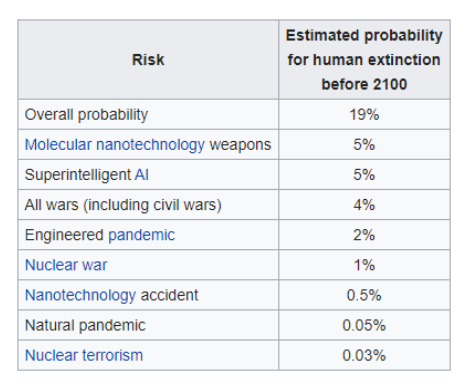 Doomsday is defined by Merriam-Webster as “a day of final judgement” or “a time of catastrophic destruction and death.” The fact that an apocalyptic event could be lingering in the near future keeps a lot of people up at night. It’s also a big topic of discussion, with questions like: When will the world end? How will the world end? Why will the world end? Perhaps the biggest argument within this topic is whether the end of the world will be from natural destruction (mother nature) or anthropogenic, meaning that it originated from humans.

Back in 2008, experts at the University of Oxford released an informational survey which suggested a 19% chance of human extinction by the year 2100. As seen in the table, nanotech weapons and superintelligent AI are tied for the highest percentage chance of ending life as we know it. One interesting piece to note is the fact that the “All Wars” category is third on this list at 4%, yet it is generally the most feared scenario by the public. Overall, percentages in the survey are small, but the fact that there’s practically a one in five chance of the world ending by the end of this century is a pretty terrifying thought.

All of these potential apocalyptic scenarios have triggered a group of people that go above and beyond in preparation. Better known as “Doomsday Preppers,” these people gather food, clothing, drinks, and other supplies in order to be fully prepared for any event that can lead to the end of civilization. One thing in particular that brought the doomsday topic a lot of attention was the American television series titled “Doomsday Preppers,” that aired on the National Geographic Channel from 2011 to 2014. The show gave the public insight on how these people live their everyday lives as well as teaching viewers the why and how they do what they do.

With outbreaks such as Coronavirus this year and Ebola a few years back, doomsday prepping is indefinitely at an all-time high. Countries are putting more money towards medical care and citizens are buying  products that may prove to be useful in the event of a catastrophe. Overall, doomsday is a topic that everybody should consider looking into because there is no telling what tomorrow will bring to today’s world.